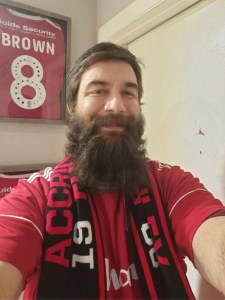 Phil Kennedy’s rise to the position of Official Accrington Stanley Supporter’s Trust International Ambassador is one he says is an unlikely story to say the least, but in some sense it would almost have to be.

In the summer of 2018 Phil was in the process of convincing his friend Arran Airs to join him in creating a podcast about lower level English Football. Phil had had an interest in The Beautiful Game for more than a decade at this point, but was looking to broaden his horizons beyond watching the World Cup every 4 years, attending his local Phoenix Rising FC games, and catching the occasional Arsenal match on TV.

An avid lifelong fan of American sports, Phil wanted to channel his enthusiasm for football or soccer as it is more frequently called stateside, and combine that with his love and knowledge of other sports to help create a show that would better explain the game to American fans.

Although Phil and Arran both supported Arsenal, they didn’t want to be just another show about big 6 and Premier League, but the entire English Football pyramid. The search for a team lower in the pyramid to support and cover as a flagship team for their yet to be named podcast came on the fateful afternoon of August 21, 2018. On an episode of the Total Soccer Show podcast, Phil heard a listener question (which he would later learn had been submitted by Ira Jersey) “Why is Accrington Stanley’s rise funny to the English?”

On the show they would discuss the famous or infamous, depending upon your opinion, Milk Advert, but the name Accrington Stanley just stuck with Phil, and he immediately went on a deep journey to discover just “Who Are They”. Once diving into it he began to learn the entire story of The Club That Wouldn’t Die, all the way from the original 1890’s club to the present day run into the English Football League for the reformed club.

Within the next few weeks Phil would find a name for his show Across The Pitch, and by Novemeber the first episode launched. By the second episode they were able to book Accrington Stanley midfielder Scott Brown as their first guest, and, as they say, the rest is history from. In the nearly 2 years since that first episode Phil has been joined by Accrington native resident, and prolific author of Accrington Stanley books, Darren Woodhead. Also joining the team this year was a 2nd Accrington native, Tony Robinson, who now resides in Canada but grew up on the very Stanley street that the club is named after.

The 3 have teamed up to interview almost all of the current members of the club (excluding players new to the club this year), owner Andy Holt, manager John Coleman, coaches Jimmy Bell and John Doolan, managing director Dave Burgess, dozens of retired club legends, other important figures in club history like former CEO Rob Heys, legendary Accrington fan cricketer and broadcaster David Lloyd, notable supporters, team broadcasters, and that doesn’t even cover it all. In 2019 Phil, Tony, and Arran formed the first official international offshoot of the Official Accrington Stanley Supporters Trust, and with the help of President Peter Leatham, created the Official Accrington Stanley Supporters Club of North America. Phil heads the U.S. Branch based in Phoenix, while Tony runs the Canadian end of things from Toronto.

The club’s first official meeting/match watch party was on November 23, 2019 at The Other Room Sports Bar in Glendale, Arizona where 11 Phoenix area Stanley supporters gathered to watch the 7-1 victory over Bolton Wanderers. Since, Phil has helped Abdulai Suburu form the Official Accrington Stanley Supporters Club of Ghana and Matt McClennan to start the Official Accrington Stanley Supporters Club of Australia, as well as interacting with groups that have formed in Spain, France, and Argentina. Phil also watches every Accrington Stanley game live on iFollow and is available on his Twitter account @AccyRising throughout every match to assist anyone with technical questions about iFollow abroad.

As of this year, Harry Austin of San Antonio Texas has also become an active member of the club stateside, and also watches every match on iFollow and is available through his Twitter handle. @Ramincol thoughout the matches. Tony runs the Official Accrington Stanley Supporters Club of North America Twitter @OASSCNA or you can reach him through his personal Twitter @ToneCat54

As things move forward Phil looks forward to the launching of the http://AccyWorld.com website which will feature and interactive map for Accington fans around the world to register their locations. This website will also feature stories about various supporters groups around the world. You can also find the Official Accrington Stanley Supporters Club of North America website at http://industryandprudenceconquer.com and Darren Woodhead is in the process of developing a website specifically dedicate to Accrington Stanley history at http://accringtonstanleymemories.com.

Through a combination of all of these projects Phil looks forward to working hand in hand with Peter Leatham to grow Accrington Stanley into a truly global brand. On a daily basis he is receiving communications from new listeners to the podcast who have “taken on Accrington as their second team”, or in the case of folks like Harry mentioned above, their new 1st team. The core of Phil’s belief is that the story of Accrington Stanley is eminently sellable to a U.S. audience that loves the underdog story, and believe that by continuing to spread the word around the states, and the world, that the Biggest Little Club in the World can become The World’s Adopted Team, or at least 2nd team.

It is with great honor that Phil accepts the position of International Ambassador, a position which he said he has already found greater knowledge in as he now knows that ambassador starts with and “a” and not an “e”. He says he understands that with great honorary power comes great responsbility, and looks forward to continuing to spread the gospel of Ye Olde Accy throughout the globe!