Peter Leatham (PL) welcomed everyone to the meeting and thanked the attendees for their efforts and understanding with the meeting being held online on Zoom during these unprecedented challenging times.

PW ran through the agenda and explained how the meeting would work, with attendees being muted, with the ability to have a raised hand icon shown on screen if anyone had any questions. This was also used when votes were needed to be cast. No issues arising from the previous AGM.

PL provided the meeting with an overview of the OASST’s operation over the past 12 months along with accomplishments and initiatives ran by the Trust.

PL thanked all the board members who have worked hard, in trying times, to ensure we continue to function, whilst embracing a whole new way of working under our new set of rules as a Community Benefit Society. There has been a lot of good work which will bear fruit as we continue to evolve.

The transition between treasurers is never straightforward due to the various banking registrations and the challenges of unravelling them through the complexities of banking regulations. This unfortunately proved to be the case and it has taken 12 months to make some headway with, but there are still elements to be resolved. As a Trust, we are able to take advantage of a slightly different bank account, which setting up has unfortunately been hampered by Covid-19, with banks not accepting new account applications for businesses whilst they prioritise bounce-back loans. This is having a knock-on effect to setting up a new PayPal account to enable us to take advantage of lower processing fees.

Taking into consideration PayPal fees and postage costs, including stamps and envelopes, I expect we have lost money on some sales. We have currently absorbed the majority of fees on PayPal (20p per transaction plus 3.4% of the transaction value) which has understandably eroded our margins. So, whilst the headline “profit” looks attractive in reality it has been a smaller amount. Once again, we need to address the headline price to cover these fees if the PayPal vehicle continues to form part of our payment structure in the future.

Currently we fall beneath the £85,000 VAT registration threshold and are therefore disadvantaged when paying suppliers. We therefore need to ensure that our sales prices take into consideration the total purchase costs to allow for an acceptable overall margin. This has not always been the case in the past.

Vote to accept the Accounts Summary.

Proposed by PW, seconded by PL, all attendees voted in favour unanimously.

JA gave an overview of our main income and expenditure as follows;

Dorothy Vernon expressed a wish to place on record her sincere thanks to JA for his efforts in overseeing the accounts. JA expressed his thanks to both PL and PW for their assistance in helping to complete the accounts.

It was also advised that the Trust will utilise the Quickbooks package to assist with our accounting procedures ongoing.

Vote accept the prepared account summary was proposed by KJ and seconded by JG and passed unanimously.

PL explained that our rules allow for between 6 and 12 Board Directors. The OASST’s previous board had 10 members, all of whom are prepared to stand for re-election. We have invited applications and only one candidate, Jeffrey Cleary, completed the application process. This would allow us to re-elect the previous members, plus Jeffrey, and still be under the maximum of 12 directors. Under our rules, we may choose to co-opt members as and when necessary.

Vote to re-elect the 10 previous board members, plus the one new candidate, into a new 11-person board.

Proposed by PW, seconded by JA, all attendees voted in favour unanimously.

JA & PW explained it was the boards intention to disapply the requirement for the accounts to be formally audited for the current first year accounts as passed by the society board and for the upcoming year, in line with rules 83.3 to 83.7inc. and an independent 3rd party examination is proposed.

Dorothy Vernon (DV) asked who will conduct the examination, and PL confirmed it will be David Wilson, managing partner of Hindle Son, Jepson & Jennings Charted Accountants.

Vote to disapply the requirement for the accounts to be formally audited for the current first year accounts and the upcoming year, in line with rules 83.3 to 83.7inc. an independent 3rd party examination is proposed.

Proposed by PW, seconded by DV, all attendees voted in favour unanimously.

There was no AOB.

PL thanked everyone for their time and attendance and for supporting the OASST. Wished everyone a Merry Christmas and Happy New Year.

The annual Trust membership subscriptions which run from the 1st July to 30th June are now due, the good news being that […]

On small business Saturday we were delighted to welcome local MP Sara Britcliffe to our market shop this morning. She left with […] 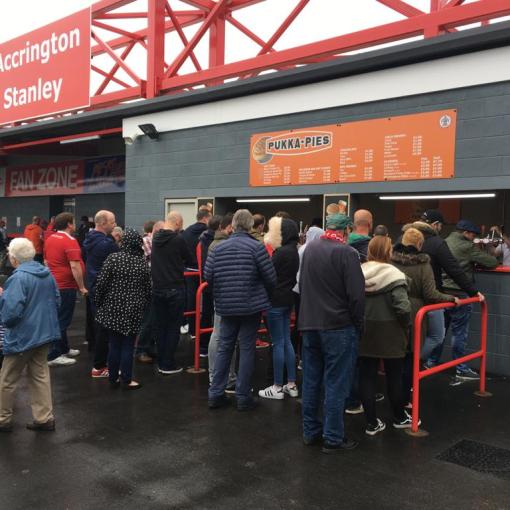 It’s football Jim, but not as we know it! The last couple of weeks has seen the welcome return of fans into stadiums throughout […]

A final revision of the plans for the redevelopment of the hospitality areas and changing rooms have now been completed. The revised […]